What is a Biosphere Region?

Biosphere regions are areas of terrestrial and coastal ecosystems promoting solutions to reconcile the conservation of biodiversity with its sustainable use. They are internationally recognized, nominated by national governments and remain under sovereign jurisdiction of the states where they are located.

Biosphere regionss serve in some ways as “living laboratories” for testing out and demonstrating integrated management of land, water and biodiversity. Collectively, biosphere reserves form a World Network. Within this network, exchanges of information, experiences and personnel are facilitated.

The United Nations Educational, Scientific and Cultural Organization (UNESCO) was created on November 16, 1945. It’s main goal is to “contribute to peace and security by promoting collaboration among nations through education, science and culture”.

In 1968, UNESCO organized the Biosphere Conference, which saw the beginning of the concept of a “Biosphere Reserve”. This was the first intergovernmental conference examining how to reconcile conservation and use of natural resources, thus foreshadowing the present-day notion of sustainable development. This conference resulted in the launching of the UNESCO "Man and the Biosphere" (MAB) Programme in 1970. In the Canadian context, Biosphere Reserves are moving towards rebranding as Biosphere Regions to avoid the connection with Canada's difficult history with "Indian reserves" as well as to change the perception of reserved areas that is not accessible by the public.

One of the original MAB projects consisted in establishing a coordinated World Network of sites representing the main ecosystems of the planet in which genetic resources would be protected, and where research on ecosystems as well as monitoring and training work could be carried out. These sites were named as "Biosphere Reserves”.

The Man and Biosphere Program recognizes areas that: 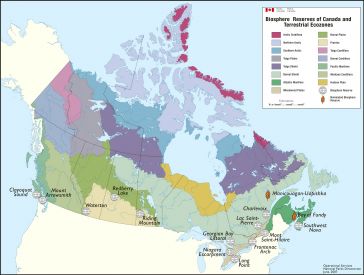 In the world, there are more than 600 Biosphere Regions in over 100 countries.

In Canada, there are 19 biosphere regions in 8 provinces.

World Network of Biosphere Regions since 2007. In 2015, it also joined the World Network of Island and Coastal Biosphere Regions, a sub-network of the WNBR formed by the representatives of twenty islands and coastal biosphere reserves around the world, which aims to study, implement and disseminate island and coastal strategies to preserve biodiversity and heritage, promote sustainable development, and adapt to and mitigate the effects of climate change.

Learn more about the World Network of Biosphere Regions.

View a list of all the current biosphere reserves recognized by UNESCO.